Artist Comment...
In this age of digital art, computer-generated images, and photoshopped pictures, I wanted to revisit the challenges of history's master painters.
As a student of the works of Da Vinci, I was always fascinated by the "Mona Lisa."  I have rendered my version of the world's most famous painting in everything from cartooning to "etch-a-sketching."  But, it was one day on a walk at Louisville's Great Lawn by the Ohio River that the basic idea for my painting was born.  The city of Louisville, Kentucky, USA has emerged into a beautiful town on the edge of becoming a world-class city.  The city skyline would make a great painting.  There was really nothing major nor original about artistically capturing the cityscape.  Photographers by the dozen set up in Indiana and produce beautiful images of Louisville across the Ohio River, so I figured I would "get to it" when I "got to it."
I had recently finished an oil painting of the "Mona Lisa" which was the exact size of the real one in the Louvre.  It was hanging above my stairway still drying when I awoke one night with the name "Louisa Villea" in my head.  I wrote the name down and went back to sleep.  When I awoke the next day, I realized that the name was simply L-O-U-I-S-V-I-L-L-E split in half with an "A" stuck at the end of both halves.  Being a portrait painter, I now realized that my not-so-original idea of painting the city had suddenly become an exciting portrait challenge.
So, I began the project of creating my own Mona Lisa.
Upon first viewing of the painting, one sees a young lady sitting with buildings in the background.  The painting stands alone as such.  However, the more I painted, the more ideas came to me.  Eventually, the "Louisa Villea" became not only a tribute to Louisvillians, but a history of the city.  Also, a history of art and the techniques and styles of master artists are incorporated within the painting.

The entire project took over 1,750 hours, not including the 15 hours to build the five-foot by six-foot frame and to stretch and prime the canvas in the manner of the master painters of old.
Rich Thompson
http://www.richthompson-art.com/ 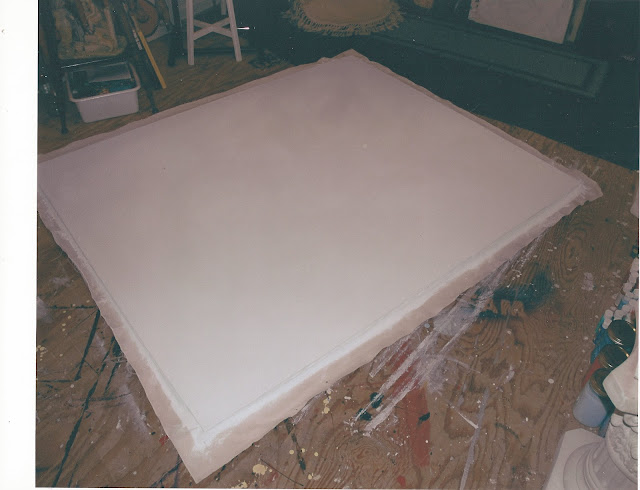